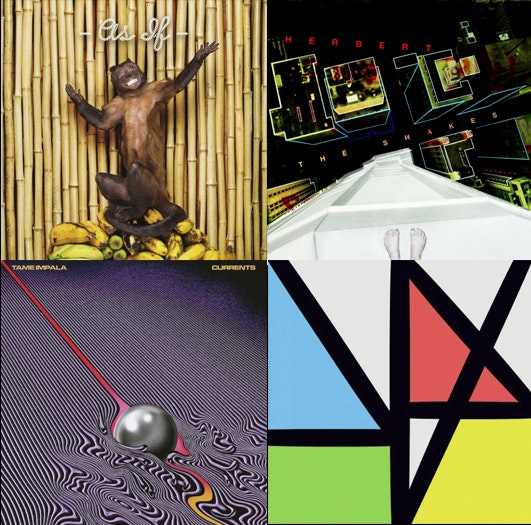 Just a top 10 for the long players this year. Not sure if it was because I had other things on and consequently didn’t listen to as much music, or that there were genuinely less great albums made during the last 12 months. Either way, these are the ones I kept coming back to:

Matthew Herbet follows a proud British tradition of musical eccentrics, gaining his credentials via ‘challenging’ albums created using the various parts of a pig or a snippet of sound from a war. Crucially, for the experimental stuff he uses the full name, while for more conventional records like this, it’s just the surname. Tracks like ‘Middle’ and ‘Strong’ are in fact really strong and eminently radio-playlist-able R&B, yet again proving his versatility and skill as a producer.

Much like his mate Kieran Hebden, Sam Shepherd is not far off genius level in terms of his productions and DJ sets, with both owing a great deal to formative sessions at the sadly defunct Plastic People nightclub. But while Four Tet has gotten more and more house-y this year, Floating Points has moved back towards the intricate and introspective with his latest release. From stunning opener ‘Nespole’, to the raw power of abruptly closing track ‘Peroration Six’, via 11 minute odysseys like the ‘Silhouette’ trilogy; this is electronic music at its most exquisite.

A second albums go, this is a return with some amount of swagger. Picking up where they left off, the Djangos build on their indie/electro platform with a whole bunch of new ideas, instruments and inspirations. Much to my delight, the eclectic tastes of band leader Dave Maclean – there for all to see on their Twitter feed or Late Night Tales entry – are all over this record, with all number of different synth sounds to be heard among the guitars on highlights such as ‘Reflections’ and ‘High Moon’.

The fantastic Frankfurter Phillip Lauer is at it again, this time making the move to Permanent Vacation for his second album. It’s one full of unashamedly retro themes – the hazy vocoders of ‘Crewners’ to open, followed by the sugary synth pop of ‘Carpet’ and marimba-laden beach house of ‘Gammelan’. He doesn’t stop there though, early electro is pillaged for ‘Msndrstndng’ and kraut rock referenced on ‘ESC’. Thing is, no offence is taken, because he nails it every time.

Nic Offer’s team have got their groove back after the frankly disappointing Thr!!!er, embracing more electronic elements than ever in order to reinvigorate their vibe. Cuts like ‘All U Writers’ and ‘I Feel So Free’ are proper club bangers, while there’s still room for some trademark funky flexin’ on the likes of ‘Freedom 15’ and ‘All the Way’.

I never quite understood why Kel McKeown didn’t sign with Ninja Tune, where his music would fit so well and he’d get the promotion an artist of his talent deserves. That aside, if he keeps on making records this good, his fledgling Drut label might just make it. His fifth album is the most accessible yet, with early tracks like ‘Doubles of Everything’ and ‘Chirpsichord’ capturing that halfway between house and hip hop sound that has propelled guys like Bonobo to the top of the Ninja roster.

A few of my favourite albums this year have seen bands successfully dabble with synths and drum machines. In doing so of course, they all owe a debt to the original indie/dance cross over group, who’s triumphant return this September showed that they’re still the daddies. Tracks like ‘Singularity’ or ‘People On The High Line’ could easily fit into most good DJ’s sets, proving that even without Hooky, Bernard Sumner and co. have still got it.

The internet tells me this is in fact the third album by Ruban Nielson’s Kiwi/Yankee quartet, but I’m embarrassed to say it took a recommendation from a friend to make me aware of their brilliance. It’s a truly weird and wonderful hodge-podge of jazz, soul, funk and indie rock which in the wrong hands could be a complete mess, but is instead a collection of incredibly catchy songs for any occasion. Think Prince and Fat Freddy’s Drop in a studio together and you’re some of the way there.

I’ve been banging on about how good a DJ and producer Mike Greene is for a few years now, so it’s fair to say I had high expectations for his second LP. Thankfully for my fragile reputation as knowing a bit about dance music, he really delivered on this first record with the mighty Ghostly label. Their press release sums up the appeal perfectly: “Fort Romeau guides us down misty corridors lined with supple synth pads, quietly thumping kicks and elastic low-end sequences reinforced by an emotive confidence.”

They’ve gone and done it again – a best album and track clean sweep. Currents was quite a departure from 2012’s Lonerism, with woozy pyschedelic rock replaced by sleek synths and 80s overtones. From the epic opener ‘Let It Happen’ to seductive first single ‘Cause I’m A Man’, via proper power ballads like ‘Eventually’, this record just flows over you like a warm wave of nostalgia. I genuinely can’t wait to hear Kevin Parker and his merry bunch of men come up with next.

As for the compilations and mixes released during 2015, there are many worthy of mention. Fabric had a pretty strong year, with Mathew Jonson’s superb live set from the club’s 15th birthday being a particular highlight, while Joris Voorn and Art Department‘s efforts were also well worth a spin.

The inimitable DJ Koze was a fine choice to mix the 50th installment of the lauded DJ-Kicks series, turning in a typically diverse set. Soul Clap‘s Watergate mix really made you feel part of the summertime party it was recorded at, just as Jon Hopkins‘ Late Night Tales entry took you deep inside his creative mind.

Boiler Room turned five this year and of course celebrated in style. I managed to make it along to one of their sessions and missed another in London which appeared to be pretty much the best thing ever:

And got the illusive DJ Harvey in front of a camera for 90 minutes:

Resident Advisor had a few good podcasts here and there. Andy Weatherall laid down a surprisingly straight up house set which propelled a few parties this summer, while another veteran, Sasha, also proved why he’s still a perennial favourite.

Of course, there were also many a mix not hosted by any big brand. Of those, another old boy, Ralph Lawson, brought the goods with a fine summertime mix, my mate Steelo proved he’s not just a graphic designer, and Tycho demonstrated exactly why I need to be dancing on the Playa at sunrise next year: