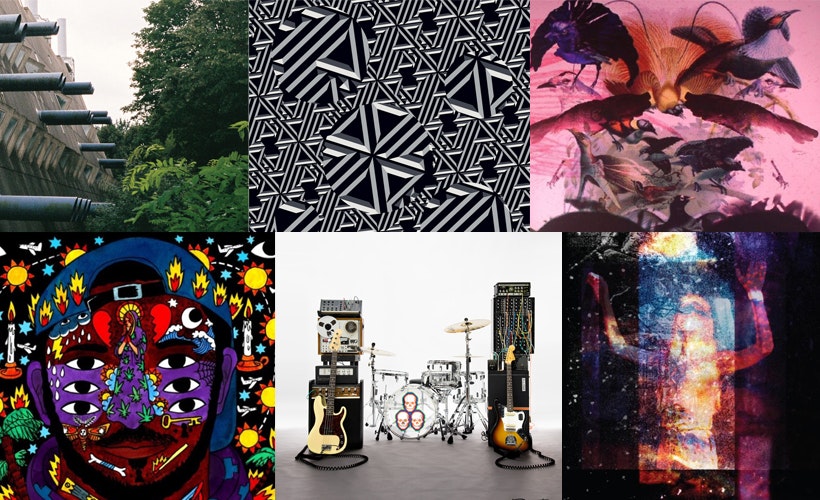 In a year when so much in politics and popular culture seemed to go wrong, once solace was the quality of music still being made across the board.

As ever, my list is pretty skewed towards electronic music – of which there was a deliciously diverse range of offerings – but it was also a particularly good year for hip hop, with the return of greats like De La Soul, A Tribe Called Quest and news of Eric B and Rakim in 2017.

Maybe I’m not trying hard enough to seek out new bands or great rock records, but bar the nostalgic choice directly below this paragraph, there’s not a guitar-based album on my list. Anyway, that’s enough of my prattling on, here’s my twenty favourite long players of 2016:

Much like New Order’s Music Complete last year, this is far more than an excuse to go on another lucrative tour. During 11 albums Bobby Gillespie’s band of merry men have tried their hand at the whole genre gamut, with Chaosmosis feeling like a distillation of everything that’s gone before. It’s certainly not all Screamdelica/XTRMNTR quality, but fair play to them for not phoning it in like some of their peers.

While Gaspard Auge and Xavier de Rosnay’s last outing was fairly forgettable, their third album sees the hairy Parisians back on form nearing their scene-defining debut. They’re clearly not taking any risks here, with ‘French touch’ staples aplenty – disco grooves, funk-fuelled basslines and soaring vocals – but like Daft Punk before them, it’s simple, yet devastatingly effective.

It’s starting to become a bit of a tired trope (for which I am partly to blame), but Mr Cooper’s scientific background (he has a PhD in computational biology) really does shine through in the precise, intricate sounds he makes. His second album sees him build this reputation further, with a many layered and continually morphing wall of machine music developed as the perfect accompaniment to the ambitious A/V show he’s been touring it with.

Apparently pieced together when Matt Cutler fell ill in New York – caught up in some kind of fever dream rave – his seventh album is very much the culmination of everything that’s gone before it. Alpha Wheel sets out the ballsy breaks and synths stall from the get-go, but as ever, there are more tender moments to be found in-between, like the delightful Sleepwalkers.

16. A Tribe Called Quest – We Got It From Here… Thank You 4 Your Service

Both a triumphant return and a fond farewell, it’s really something special that this album got made at all, given the short amount of time between the group’s reunion and Phife Dawg’s untimely death. Thankfully it fits snugly into their esteemed cannon, happily balancing the jazzy samples and booming bass of old, with some interesting new production twists and a plethora of great guests.

I think I said in my review of last year’s release Howl that Ryan West deserves to be a far bigger name than he was, or is. This latest EP for Erased Tapes only adds fuel to that fire, with a continuation of the beautiful, building soundscapes that should have him up among the likes of Jon Hopkins or Clark.

I’m still slightly embarrassed it took me so long to get on Ed Handley and Andy Turner’s Warp-powered bandwagon, but boy am I glad I finally did. Nearly 30 years making electronic music, with this their ninth album as Plaid, it’s frankly incredible the stuff still sounds this inspired – from the imposing opener Do Matter through characteristically melodic and moving numbers like Clock.

Oddly for someone who makes his living from writing words, I’m much more interested in the instruments than the lyrics when it comes to music. This stands as something of an obstacle to most hip hop, which is often not much more than a rapper and a basic backing beat. Given this guy was found to be the wordiest in the game, it should mean I’m incompatible with his work, but as with most of the parts of this genre I love, Aesop Rock has a great voice, strong flow and really interesting production. More so than any of his previous LPs, this one nails it on all three counts.

As I wrote in my full review of this album, this is what a couple of Parisians exiled in London sounds like. There’s plenty of Gallic flair, tempered and toughened by British gloom. I’ve long been a fan of Ivan Smagghe’s work, and young Tim Paris seems to be a great production foil for him.

11. Youandewan – There Is No Right Time

A late entry to the list (I literally downloaded it this morning) Ewan Smith’s debut album on AUS ticks all the boxes for me. The Berlin-based Yorkshireman apparently channeled a breakup and new city loneliness into creating this collection of sublime electronica – ranging from fuzzy lo-fi house to Lone-esque rave breaks and all the way out to early Ninja Tune trip-hop and golden era hip-hop.

Arguably the biggest TV show of the year, the Duffer Brothers’ retro masterpiece owes a great deal of its success to the pitch/period perfect score. Eighties referencing analogue synth music is not a new trend, but aside from maybe Com Truise, few have so accurately captured that warm nostalgia so accurately – or, to be fair, the creepy noises that made ‘the upside down’ so incredibly atmospheric.

Maybe it’s got something to do with him inviting his daughter Lyric to co-produce, or it could just be the victory lap that its title suggests, but whatever the reason, Robert Hood’s latest under this alias is markedly more blatant and boisterous that previous work. Tracks like Music and Spin are aimed squarely at the floor – proper looping techno for the top of the night – so this is definitely more jackin’ Chicago than industrial Detroit.

8. De La Soul and the Anonymous Nobody

Free from the constraints of a traditional record deal, but also burdened with the various administrative hassles of going it your own, De La’s Kickstarter-ed eighth album took its sweet time; but thankfully was well worth the wait. For a proper review, look no further than my old workmate Hugh, but suffice to say this is a wonderfully diverse return, taking in everything from David Byrne to Damon Albarn, Estelle and even Justin Hawkin from The Darkness.

This man’s talent for subverting house music norms was laid out for all to see on his 2014 breakout release Music For The Uninvited. A couple of years later and he’s confirmed that promise by smashing the tricky second album syndrome with yet more slinky, sexy, sunny dance music. Tracks like Paradisea and Blush went big over the summer, but there are few missteps across 45, expertly-crafted minutes.

Like quite a few of my favourite records this year, Stephen Wilkinson’s fourth release on Warp is heavily front-loaded. Album opener Petals sets the scene, combining little more than his sonorous vocals and a luscious, looping guitar line to great effect. A few tracks later, Town and Country demonstrates Bibio’s knack for melding folksy elements with funk and soul sensibilities. In fact, squaring the fact he’s actually from the West Midlands, with the gloriously American music he makes, is truly credit to his skill as a producer.

It’s no coincidence that this album was recorded in Andrew Weatherall’s Bunker studio and he was responsible for producing Primal Scream’s seminal album Screamadelica. For their follow-up to Howl, Jagwar Ma have unashamedly mined the best of that band and their peers like The Stone Roses and New Order. Much like their Aussie brethren Tame Impala, the band’s sound has evolved, with lots of interesting electronic experimentation on top of already solid song-writing.

4. Beyond the Wizard’s Sleeve – Soft Bounce

Erol Alkan proved his eclecticism way back in the days of his pioneering club night Trash, continuing his penchant for things left of the dancefloor via the Beyond the Wizard’s Sleeve side project with Richard Norris; creating all manner of interesting remixes over the last decade or so. That genre-defying nature is immediately evident on their debut long-player – as within the first five tracks they’ve run through Contino Sessions-era Death in Vegas , early Black Rebel Motorcycle Club, mid sixties avant-garde Euro pop and late eighties synth-infused shoe gaze.

This album kind of came out of nowhere to become one of my favourites this year. I knew him as the man responsible for the fun of Pantalon and a similarly silly cover of the Space Jam theme song, but his debut album shows he’s got other settings. That’s not to say The Bells isn’t entertaining – tracks like Dance… While the Record Spins are day-glo dancefloor destroyers – but the balance between ecstasy and melancholy, which elevates all great disco, is struck expertly by the big Swede.

Sixteen years and countless unsubstantiated rumours later, it’s fair to say expectations were high for the sequel to Since I Left You. As various interviews with the remaining members revealed, Wildflower has been through several iterations and overcome any number of bumps in the road, but thankfully in the end solidified into a joyous celebration of hazy, happy summer days. Progression comes subtly, via well-selected vocal contributions and some live instrumentation, but the sonic patchwork technique is maintained, making for an album you can’t cut from; just get lost in the boundless creativity.

It’s been an interesting few years for young Louis Kevin Celestin. His re-edit of Janet Jackson’s Ifgot some early Soundcloud stardom, which he built upon with things like album precursor Leave Me Alone. As demand for DJ sets grew, so did stresses around still living at home in Montreal and eventually coming out to his strictly religious Haitian parents. All this is just backstory though, when the music is this good. Combining his love for hip hop and R&B produced by J-Dilla and The Neptunes with warm and fuzzy deep house, he’s gone and made a practically flawless record.

If you’ve made it this far, then here’s a bonus top 10 mixes of the year to reward your persistence: