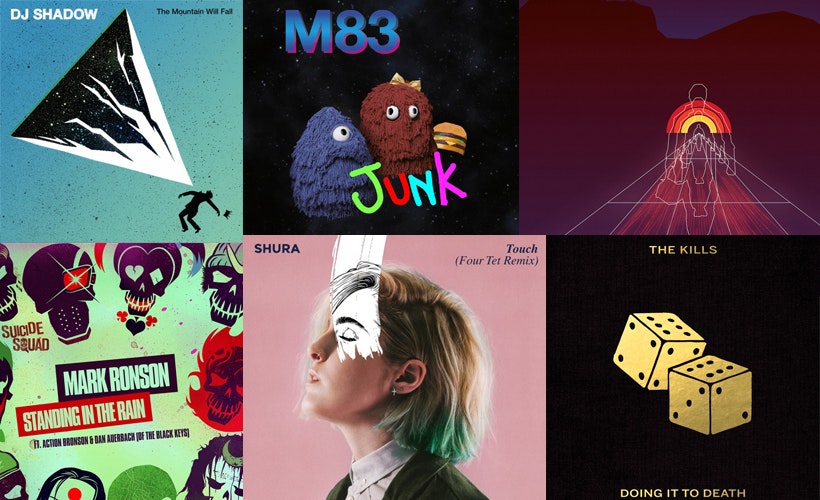 You’ve seen the rest, now read the best. My best, tracks of the year:

How he outlived his mate Bowie I’ll never know, but it’s truly a pleasure to have the Ig still around and active at nearly 70 years old. The fact he’s making such good music, with the likes of Homme and Helders, is surely just a bonus.

The one good thing to come out of the expensive mess that was Suicide Squad.

Clearly a shadow of their former selves, at least Kele’s new crew can still turn in a tune every now and again. I listened to their album so you didn’t have to; this was that highlight.

Last year’s long player from Luke Vibert side project Kerrier District contained a few gems here and there, but it took someone with KiNK’s abilities to apply the proper production polish.

Nothing particularly groundbreaking from Mosshart and Hince on the latest album, but that doesn’t mean they’re not still capable of stripped back, catchy little numbers like this.

Donald Glover is a seriously talented man – already a solid standup, decent actor and writer – under his musical Gambino guise he’s just released the soul/funk record of this year, or next. On Redbone in particular, he’s channeling the dearly departed Prince to a frankly frightening extent.

With the album, this and the Lazarus video, the Thin White Duke essentially gave his fans something to ease the pain of his passing; seemingly taking creative control over even his own demise. While musically it wasn’t immediately accessible stuff, you have to appreciate Bowie’s dedication to pushing his art forward until the very end.

Brass, piano, soulful vocals and lots of lovely percussion – these are the things that Ramble John Krohn does best – and long may he continue to do so.

The boys are back and better than ever. It’s not exactly subtle stuff, but then that was never their strong suit. A bit more mature than their debut and far more consistent than the last album, there are several sexy slices of French funk to choose from on Woman.

His second album wasn’t nearly as good as the first, but these two still demonstrated why the pizzaman is still the jewel in Dirtybird’s crown; lots of low bass rumble with some classy touches on top.

What a lovely lyrical combination, Del and Lif have such complementary voices they could be reading the phone book as far as I’m concerned.

Thom Yorke and the lads back on typically compelling form. If the rest of the album was a bit of a brooding grower, at least this was more straightforwardly satisfying as the lone single.

As I wrote earlier in the year about Anthony Gonzalez’s latest, it’s way too over the top to make it into my album chart, but that’s not to say there weren’t a few moments when his undeniable talent shone through – these being a couple of those songs where a cap should be doffed.

I’m so glad I took a tip on this chap, because just about everything on his debut album is worthy of an individual mention here. I’ll pick these two as favorites, but I implore you to give some time to the rest.

Hard to cut just one from De La’s triumphant return, so I haven’t. If you haven’t heard this record yet, get on it immediately.

This Dutch duo have found a perfect home on Kompakt, their measured melodies and precise drum patterns fitting in well alongside Mayer, Voight and Paape’s vision and seductive sound.

I wasn’t a big fan of the new album, but this is Blake at his best; absolutely does what it says in the title.

Lord knows how Cassius convinced all these A-list collaborators – Mike D, Cat Power, Pharrell Williams, etc – especially since it’s been a decade since their last album. But fair play to them for not squandering the talent on show and instead producing some of this year’s finest pop music.

When Phife Dawg died in March it felt just another reason to direct displeasure at the phenomenon known as ‘2016’, but then a few months later the remaining members of the Tribe returned in triumphant fashion, getting ex-members like Jarobi White and Busta Rhymes inspirationally involved. Between them, De La and some more modern marauders, hip hop did its best to revive a wretched year.

Carrying on the much-derided ‘math rock’ mantle from Foals and Battles are these plucky Canadians, who specialise in big, building, intense cacophonies of guitars and drums, which I can only imagine would sound brilliant live.

Ryan Lee West really realised his potential with the 6-track mini album Night Melody – this particular cut being a good demonstration of the intricate, emotive electronica he deserves such credit for.

Same same, but different. I feel like I’ve written this already in previous years, but it really is a case of ‘if it ain’t broke…’ with Seth Haley. Yet more analogue synth noodley goodness.

A weird little white label that dropped back in the spring – and was subsequently approved by Macca himself – which hasn’t been out of my head ever since. As Alan Partridge once said: “Wings, the band the Beatles could have been.”

What a joy to have deep house originator Larry Heard back making music under this moniker, and all the better when it doesn’t require any fake praise. This is a properly beautiful piece of work.

To be still going after 25 years in this game is something, but managing to keep making music that’s recognisably theirs, but also fresh and engaging; well that’s borderline sorcery.

Underground Resistance’s former ‘minister of information’ Robert Hood is one of the founders of the genre, so you’d never doubt his techno chops, but it’s nice to know he’s still got an album full of dancefloor destroyers in him.

Any BoC production is always going to have good shot of making my top fifty, but when they’re remixing source material as strong as this, then it’s a no-brainer.

Between starting up their own live show and keeping up with a punishing international DJ schedule, it’s surprising the Bicep boys had any time for production work. Thankfully, they haven’t lost their touch, as this slice of hypnotic house demonstrates.

I still can’t get over how much Reminder sounds like Skream’s remix of La Roux’s In For The Kill, but then I liked that track, so this one also gets me going.

Nick and Alex are your go-to guys for NYC disco stylings. Fundamentally their sound hasn’t moved on much in a decade, but you won’t see me complaining.

After the success of Dahlia last year, the Belfast duo got back into the studio with Hammer for a similarly simple ‘drums and synths’ 4am solution, released as part of Aus Music’s 10th anniversary compilation.

Bit of a dream collaboration this one – from an album full of them – with the French and German heavyweights combining to create a delightfully dreamy end-of-the-night noggin soother.

Nice to have the original trip-hoppers back making music again – this atmospheric number being my favourite of the recent releases.

One Weegie giving another a leg up – the now ubiquitous Jackmaster making Mr Sulta’s stunner of a song the first track on his DJ-Kicks mix.

Few indie bands could get away with sticking a scratch solo in their lead single, but then Metronomy aren’t really a band at all. All hail Joe Mount’s unique individualism.

Hard to pick a favourite from Erol Alkan and Richard Norris’ debut album, but this first taste confirmed – if it was ever in doubt – that their production partnership is one to be cherished.

Another record full of fine songs, making it hard to pick just one or two. Fair play to this bunch of Aussies, they really doubled down on the potential shown on their first album.

It’s been a relatively quiet year for Kieran Hebden on the production front, but ever reliable for a remix, he’s done a lovely job matching this young lady’s sugary vocals with a cosy, chugging bassline and saccharine sweet melody.

Sounding something like Nils Frahm and peak-era James Holden here, this young man can both produce and play live some of the most interesting electronic music I’ve ever heard.

Stephen Wilkinson has to be one of this country’s most under-appreciated artists, continuing a long run of form again this year with several gorgeous tracks on latest LP ‘A Mineral Love’; showing the weirdos at Warp do have a softer side.

The big hairy Norwegian here, proving once again that no-one does eight minute cosmic disco workouts like him – with the possible exception of his fellow countrymen Prins Thomas and Todd Terje of course.

It’s become something of a truism that this guy makes the best modern old skool music around. This latest banger proves once again that his inspiration wormhole is still well connected to the early 90s.

Stick either of these on, close your eyes and it’s not hard to picture yourself somewhere sunny with a big grin on your face – perfect for both 4am on a heaving dancefloor or 4pm on your balcony with a BBQ.

Last year his disco fun-track Pantalón sneaked into my end of year list, but this year the big Swede proved he’s got a lot more depth, with superb album The Bells.

I’ve said it before, I’ll say it again, Phillip Lauer knows his way round a banger. The fabulous Frankfurter has been on quite the run of form lately and long may it continue.

This burrowed its way into my brain back in February and has stayed there ever since, popping up now and again to soothe my synapses; lovely stuff.

Proper production paired with lyrical dexterity and an interesting voice – that’s all I’m looking for and exactly what I found with this track – everything finally comes together for hip hop’s perennial underachiever.

2. DJ Shadow – Nobody Speak / Bergschrund / The Mountain Will Fall

Most definitely an album of two halves, or even one third really, as things tail off hard after the first four tracks. But when three of them are these, Josh can be forgiven, as this is easily his best work in well over a decade.

Hard to choose from what quickly became my album of the summer (although annoyingly none of my preferred choices has an online video), such was the quality of Louis Kevin Celestin’s debut. ‘Bullets’ certainly got the most rewinds on my stereo and it encapsulates what made the record so great – catchy drum lines, laid back synths, perfectly-picked guest singers and a laid-back assuredness to the production that’s way beyond where he should be at this stage.