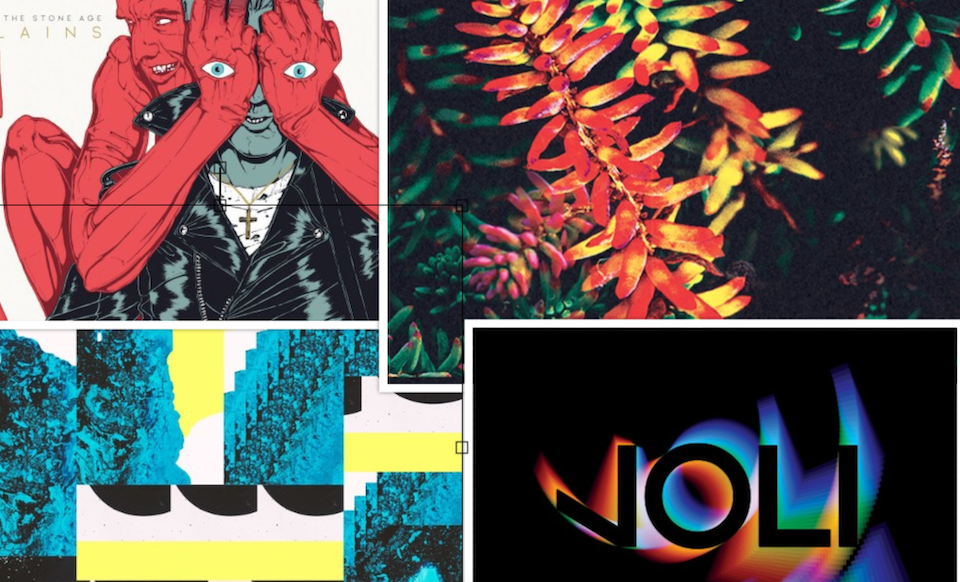 When I started thinking about end of year round-ups in the autumn, I was convinced this would be another top 10 like last year, as I just couldn't bring to mind that many great records. But when I finally started listening through all the bits and bobs I had downloaded or bookmarked during the year, it turned out I could happily double that list length.

Obviously there's the usual electronic music bias, but LPs from The Horrors, Ride, The War On Drugs and Alt-J gave a good showing for guitar-wield-ers, while albums from Kendrik Lamar, Run the Jewels, Shabazz Palaces and Action Bronson just missed the list from a hip hop perspective. Also, a big shout to those ploughing furrows in the leftfield, like the wonderful Kelly-Lee Owens, Fever Ray, Bjork and Letherette.

That's enough waffle though, so here are my 20 favourite long players of 2017:

This album and the world tour that went with it - coupled with preceding years promoting his Outlier club night and radio show - seem to have finally cemented Simon Green's Bonobo brand as one of the strongest in the game. Shame then, that Migration didn't really push things forward that much. That's not to say it isn't a perfectly pleasant listen, with highlights like Break Apart, Surface and Kerala, but it's not quite inspired enough to go any higher in this list.

I seem to write this every few years, but such is Seth Hayley's consistency, that I must repeat myself. It's more of the same woozy 80s analogue synth work - like if Stranger Things was set in a Miami nightspot. I've said it before and I'll say it again, but if it ain't broke, don't bother fixing it.

In the five years since Steam Days, this Norfolk native apparently developed something of a musical writers block. Lifting him out of his funk was a Korg Prophecy synth and a split with his long-time Border Community home. Now part of the Ninja Tune stable, he's produced his best work in a long time. Still very much experimental electronica, there are now more mainstream elements like vocalists Prurient and Raphaelle.

17. Queens of the Stone Age - Villains

It was a bit of a surprise to find Mark Ronson on production duties for the Queens' seventh album, but much like he's done for just about every other artist and band before, the master knob-twiddler has stripped things down to reveal the true essence and sound of Homme & Co. It's certainly a poppier album that earlier work, but all the better for it. Less thunderous rock god posturing and more dirty disco swagger.

Maybe I'm becoming predictable in my middle age, but if one of my favourite musicians makes a new album, I'm going to listen. And if it's good, I'm going to praise it in these lists. So here we are again with Tony Simon, the hip hop outsider consistently crafting beats of the very highest quality for a receptive niche of former boombap backpack rap fans.

I had high hopes for this long-delayed (Houndstooth, being Fabric's label, were also in a spot of bother earlier in the year) long-player, given Ross Tones' previous string of club banger EPs. That floor-focused-formula isn't replicated here though, as Embers is an ebbing, flowing, glitchy, melodic whole - a proper dance music album that really captivates from start to finish.

In just a few short years, this pair of Belfast bloggers have gone from posting about their latest record store finds to becoming one of the most in demand DJ duos and live acts in the industry; topping off an already impressive 2017 with a very accomplished debut album. For me it didn't quite live up to all the hype and expectation that previous productions had built, but tracks like Glue and Aura really show how their good taste has filtered through into what they make.

I've been sort of vaguely aware of Annie Clark's burgeoning career via some of the music writers I read/follow, but it wasn't until actual people I respect the opinion of started raving about this album in particular, that I actually decided to listen in earnest. I'm glad I finally got my act together, because this is great. Weird, wonderful, pop music, pushing things forward.

Another of my go-to-guys, I'll give just about anything Hans-Peter's been involved in a shot on the speakers. After a few more experimental releases, this saw the Norwegian cosmic disco king go back to basics, building beautiful, hazy house music for long summer days basking in the Balearics. Talking of which, I was very close to making a late replacement when I finally got round to hearing the similarly balmy Talamanca Sounsystem LP - give it a go if you want more of the same sexy 4/4 chuggers.

When it comes to hip hop I'm unashamed nostalgic, happy to hark back to the golden age of mid-nineties funky breaks and fresh rhymes. I've always wanted production first and foremost - which DJ Format's creditable crate digging brings - preferably paired with verse that's not bogged down in the usual gangsta tropes, which Abdominal ably provides. Rapping about food, meditation and white rappers, amongst other things, this is refreshingly British, but with a classic US sound.

For their second release on Monkeytown, Matt Benyayer and Tom Edwards have managed to distill years of disparate potential into a coherent whole. According to the PR notes, this is at least in part down to hours putting in manipulating machines during their acclaimed live shows.

You always knew James Murphy and his merry band were going to return at some point, the question was, would it be triumphant or terrible? For me, the answer is somewhere in-between. I wasn't quite as enamoured as some critics, but it's a darn sight better than This Is Happening. Much like many of those on this list, there's not really a standout track, just a solid selection of songs seemingly cherry-picking the highlights from previous records.

A succession of things made me not want to bother with this album. Firstly, being distinctly disappointed by their dreary set at Bestival in 2012, secondly having this feeling compounded by a wishy-washy second album Coexist, and thirdly having my suspicions confirmed that Jamie XX was the talent behind the group with his debut album in 2015. But I kept on hearing the catchy Hall & Oates-sampling On Hold during the summer, so gave them another shot. I'm glad I did, because this is a superb record, not overly melancholic like the last and really building on the raw potential of the first.

Any album that begins with the lyrics 'I feel weird, comb your beard, brush your teeth... still feel weird, beat your meat, go to sleep' gets a thumbs up from me. Stephen Bruner's third record is by far his best work yet - wonderfully weird jazzy bass noodling on the right side of freestyle fannying about, keeping things catchy and mainstream via collaborations with the likes of Kenny Loggins, Kendrick Lamar and Pharrell.

For his third LP, Ernest Greene has changed colours again. First it was woozy solo synth pop, then a more band driven sound on iconic label Sub Pop. And now the equally-excellent Stones Throw have given him creative freedom for a kaleidoscopic journey through hip hop sampling and West Coast psychedelia. It's a thoroughly entrancing journey - especially when accompanied by the visual collage above - sounding somewhere between The Avalanches and Tame Impala.

For Dominic Maker and Kai Campos' third LP they've restricted themselves to a couple of Korg synths, giving the whole thing a very definite sound; something the last record lacked. What's less restricted though is the use of collaborators, ranging from the bad (I still can't stand King Krule's voice) to the good (Micachu proving again how wonderful he is) and the somewhere in-between (James Blake doing his thing just fine). While the duo have now left behind any vestiges of the post-dubstep sound they heralded, the new sound of London town is at the heart of this fine album.

Finally stepping out of SBTRKT's shadow (and Drake, Kanye, Jessie Ware, Solange for that matter) for a first full length under his own steam has got to be daunting. Turns out all that singing, songwriting and producing talent Sampha Sisay showed on other people's albums was indeed a good indicator of how he'd get on, and the South London lad thoroughly deserved his Mercury Music Prize. He tackles some serious stuff lyrically, but with that unique voice and a soulful sonic palette, it's a joy to listen to.

Created at their Deewee studios in Ghent, the Dewaele brothers have gone back to basics, recording the whole thing in one take with five other musicians, three of whom - Iggor Cavalera, Victoria Smith and Blake Davies - are drummers. That last point goes some way to explaining the album's oomph, but unlike their Nite Versions or remix work as 2ManyDJs, there's a clarity and restraint to tracks like Missing Wires and Do You Wanna Get Into Trouble? that makes them all the more impressive.

I don't think Kieran Hebden's ever really made a bad album, but this is certainly a return to his very highest form, after 2015's Morning/Evening experiment. There are perhaps less standout tracks than 2010's high water mark There Is Love In You, but I think this is a more rounded piece of work, taking in everything from earlier downtempo work (LA Trance) through sublime sitar jams (Two Thousand And Seventeen) and on up to ecstatic extended breakdowns (SW9 9SL). There's not a dud on here and it all blends into a beautiful, blissful whole.

He's only gone and done it again. Much like his mate above him in this list, Dan Snaith's consistency in recent years is to be applauded. Whether it be as Caribou or Daphni, everyone's favourite maths teacher knows how to make good music. If you heard his FabricLive mix then not all of this will be new to you, but even the filler is killer. From the synth-bending opener Poly, to the funk tool that follows in Face to Face, through peak time floor fillers like Tin and 90s-house-done-right with the title track, this is a delightful distillation of all the time he's spent in nightclubs since moving to this side of the pond. Bang it on before you go out out and I guarantee you'll have a better night because of it.

As is customary, a quick word on some of the best mixes this year. The usual suspects were on fine form, with long-overdue Fabric installments from Midland, Roman Flugel, Steffi, Special Request and the aforementioned Daphni being well worth a listen. DJ-Kicks did very well to sign Kerri Chandler, Lone and Michael Mayer up for two disc masterpieces. Likewise Gerd Janson, who convinced the legendary Tony Humphries to sequence his 15-year Running Back retrospective. Along the Lauer, Gerd was on mixing duties himself as Tuff City Kids put together the second installment of the Lifesaver series for Live at Robert Johnson.

The Essential Mix provided - predictably enough - some essential mixes, particularly those by Henrik Schwarz, Bicep, Leon Vynehall and Soulwax,  Resident Advisor meanwhile, chose well for their 600th podcast, enlisting the services of Black Madonna for a scorching selection. After taking a year off, Jackmaster's Mastermix made a welcome return this month, while I also thoroughly enjoyed the concept of Detroits finest techno DJ/producers reworking the back catalogue of mighty motor city alumni Funkadelic.