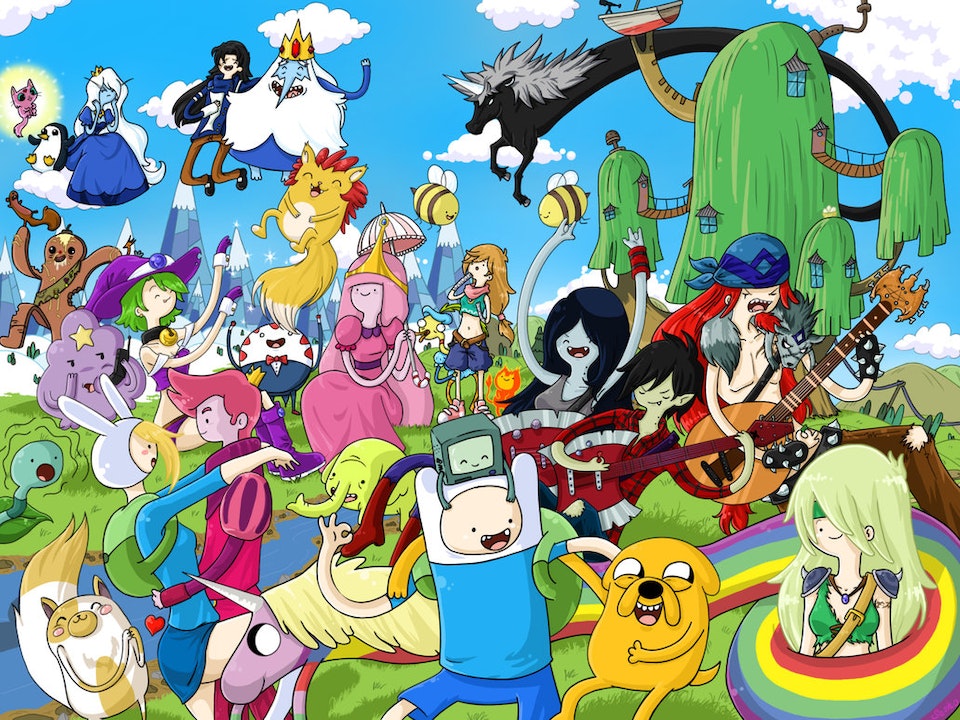 In Praise Of: Cartoons

Earlier this year, we introduced our boy to the wonderful world of telly. The books told us it was an appropriate time to start introducing new colours, shapes and sounds to his wee world – plus his mother needed a bit of time to herself.

She got him started with the medium via one of Disney’s modern classics, Finding Nemo, and it appeared to be a pretty successful distraction for an hour or so.

This got me thinking of what other treats are in store for him in the coming years – as well as which cartoons I grew up on and some of the modern animations I’ve been enjoying recently.

Before I switched to Football Italia, cartoons were what filled up early Saturday mornings in front of the TV. Things like Rude Dog and the Dweebs, The Racoons or Sharky & George are what immediately spring to mind from the early to mid-nineties.

While these were all great at the time, having been put onto some of the current cartoon crop by my small relatives, I’m quite jealous of how weird and wonderful things have gotten since then.

I was already aware of the brilliant nonsense that is Spongebob Squarepants – as a ski instructor I found an easy way to get kids on side was starting a theme tune singalong – and the deviant insanity of Ren & Stimpy certainly helped pave the way, but some what’s followed really takes the surreal silliness and adult crossover potential up several notches.

Cartoon Network’s Adventure Time is a case in point. To try and explain it to someone and you’ll sound like a gibbering idiot, but watch a few episodes and they’ll begin to understand why it has built such an obsessive fanbase.

Created by Pendleton Ward in 2010, at a basic level it follows the adventures of a lone hooman, Finn, in the Land of Ooo, with his trusty sidekick and stretchy dog, Jake. Early series’ were mostly whimsical wanders through the mysterious world, usually defending different princesses, battling strange monsters and learning life lessons.

However, moving into the sixth and seventh seasons, things get seriously cosmic, psychedelic and downright scary (perhaps due to Adam Muto taking over as showrunner from Ward). Some pretty big themes are dealt with – Finn’s father abandoning him, the definition of friendship, love and heartbreak, dealing with dictators, the meaning of life and death – and you begin to wonder how much of this younger children will be appreciating.

The very fact such scope is attempted on a kids cartoon should be applauded though, and my suspicion is that the way these things are presented – with the show’s subversive humour, great music and a Dungeons and Dragons escapism – could well be the best way to educate/entertain young minds.

The free-wheeling, seemingly randomly storyboarded plots are delightful and bewildering in equal measure, with something to offer people of any age.

The third main Adventure Time creator, Patrick McHale, arguably went one better a few years ago though, in coming up with the mini-series Over The Garden Wall. This story similarly follows two protagonists on their adventures – with lots of great voice talent (John Cleese, Tim Curry, Elijah Wood) – but has a markedly different animation style and narrative arc.

It’s quite a lot darker, both visually and in tone, but still has some very funny characters and inspired songs. I won’t say too much more, apart from imploring you to give it a go.

Sticking with the stuff ostensibly aimed at children, Cartoon Network’s The Amazing World of Gumball is also well worth a mention, for its bright and boisterous cut’n’paste mix of cartoon and real life visuals.

Even better, but over on the DisneyXD channel, is Axel Hirsch’s Gravity Falls. Notable for its creator’s insistence on just making two series’ – flying in the face of US norms – the cartoonery is far more traditional, but the writing is anything but.

Focusing on Dipper and Mabel Pines, who go to stay with their great uncle Stan for a summer in the eponymous town, it’s all about the supernatural things that go on around his abode and business, The Mystery Shack. The dialogue is snappy, plots entertaining and there are plenty of horror/sci-fi/pop culture references thrown in for those who’s youth spanned the 80s and 90s.

Into the second series things really get interesting, with great continuity between episodes (a lack of which always annoyed me in other cartoon shows) and some really well-developed friends and foes being introduced, taking the story to an impressive hour-long finale.

All of these I’d happily show my son, while the following suggestions will probably be held back until he’s well into the teenage years – assuming it’s not all virtual reality AI-powered holograms by that point.

Let’s start with the twisted brilliance of Rick and Morty. From the warped minds of Dan Harmon and Justin Roiland and hosted by Cartoon Network’s late night offshoot Adult Swim, it follows the titular mad scientist Rick Sanchez and his grandson Morty in their attempts to balance family life and inter-dimensional space travel.

The show stemmed from an early pilot which bastardised the relationship between Back to the Future’s Doc and Marty – while also taking inspiration from the Hitchhiker’s Guide to the Galaxy and Dr Who.

Roiland does a great job of voicing both main characters – contrasting the stuttering, distressed timidity of Morty with the sweary, burpy, aggressive eccentricity of Rick. The show is frequently indecent, fantastically violent and properly hilarious – I recommend it wholeheartedly. Just don’t ask Dan when season three is coming out.

Completely different, but also utterly wonderful, is BoJack Horseman. Created by Raphael Bob-Waksberg as a Netflix Original, it stars Will Arnett as the titular man horse, with the likes of Aaron Paul and Alison Brie also filling key roles. He is a former 90s sitcom star, languishing in a Hollywoo Hills bachelor pad and looking for an Alan Partidge-eque bounce back to celebrity relevance via a tell-all autobiography.

One of the best things about the medium of animation is the freedom it gives to do anything with stories and characters. In this instance, it’s the fun that can be had with mixing humans and real life stars with the fictitious and anthropomorphic animals like BoJack and his nemesis Mr Peanutbutter.

The first series takes a while to get going, but should definitely be stuck with, as along with a lot well-written jokes, there’s a real sense of melancholy running through proceedings, which by the end of the second season has built into a genuinely emotional breakdown for the big horse-man. It’s a balancing act that could ruin a show, but they’ve pulled it off with aplomb.

It also has a superb theme tune, courtesy of The Black Keys’ Patrick Carney:

Distinctly less subtle, but laudable for its filthy fun, is Archer. It’s been going since 2009 and recently renewed for another three seasons (the 10th will be its last, according to creator Adam Reed), so I’m hardly the first to trumpet this show’s greatness – but let me add my own toot to the cacophony.

Following the undercover exploits of the International Secret Intelligence Service – the only ISIS I’ll ever recognise and respect – and lead spy Sterling Archer, the animated format lets the action get several multiples more chase-laden and explosion-fuelled than Bond or Bourne could ever manage.

But over and above the espionage drama, Archer is all about the dialogue – slick, sexual and very, very funny – the boozy bickering between Sterling and his mother Malory and his ex-girlfriend Lana and fellow colleagues like Cyril, Pam and Ray is endlessly quotable. Props to the cast for their wonderful voice work – no one more so than the main man himself, H. Jon Benjamin.

The very same H. Jon Benjamin plays a very different character in Bob Belcher, the perpetually downtrodden owner of New Jersey diner Bob’s Burgers. I really can’t get enough of his voice – or Kristen Schaal’s for that matter – but that’s not the reason I love the show.

I enjoy its sedate pace, relative inconsequence of storylines and wonderful attention to detail – but possibly most of all – the music. The little sing songs that frequently break out and always accompany the end credits are just a joy.

I’m aware this blog has become a bit of a monster, so I’ll try to bring it to a close. You may be wondering why I’ve missed out some of the biggest comedy cartoons of all time – the likes of Family Guy, Simpsons and South Park – but I can’t help feel they’ve run their course, and were it not for insatiable American TV studios churning out series after series, they should have gone out while still in their hilarious prime.

An argument could respectively be made for the merits of the funny-for-a-few-seasons American Dad spin-off, the continued ingenuity of the intro couch gags, or that US election parodying last series which apparently just about killed Trey and Matt – but I’m not going to waste any more of my time on them.

One last less mainstream cartoon big-up before I go then, as an absent-minded scroll through Twitter a few weeks ago found my thumb hovering over news that Samurai Jack would return for a fifth and final season.

I must admit, I haven’t kept up with the show since a younger self was mightily impressed by the surprisingly abstract animation, exhilarating martial arts action and refreshingly grown up plots. But I’m glad it did well enough to warrant re-commissioning – proving, as is the theme of this post, that children are smart and sophisticated enough to appreciate advanced/adult animation – so made a point of catching the latest episodes on FOX.

I feel like I’ve definitely missed out some great animated shows from this list – I can already think of Mike Judge classics Beavis and Butthead and King of the Hill, plus things like Johnny Bravo, Invader Zim and Dexter’s Lab – but please send me any suggestions.