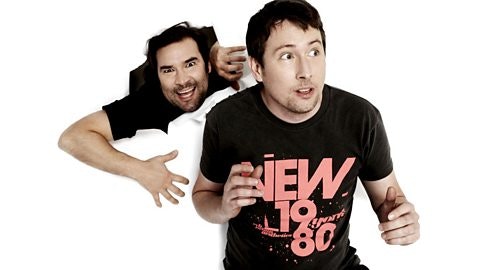 In Praise of Podcasts

In case you haven’t heard (and I really shouldn’t assume everyone’s as loyal a follower as me) Adam and Joe are back with their stupendous BBC6 Music Saturday morning show.

In honour of their triumphant return – from 15 months of film making and fannying about – I gave the show a full listen on the iPlayer, but will revert to their award-winning podcast, as I rarely spend three hours in front of a screen with nothing on it.

Since 2007, the Big British Castle’s threatened digital-only radio station has been the happy home of these two silly men, whose inane weekly blatherings have immeasurably improved my commute and that of countless others around the world. Many miserable mornings trudging through the rain or being squeezed into the tube were countered by the literal lols that memes like Stephen!, text the nation, made up jokes and song wars created.

It really hasn’t been the same without them, but their extended absence did lead me to scour the interwebs for some replacement podcasts. While I haven’t found anything that quite matches A+J’s wonderful waffle, there are some strong contenders out there that got me through last year. So here’s a wee run-down of my favourites, split between those with and without talking.

Adam & Joe aren’t the only famous podcasting duo, both the Simon Mayo/Mark Kermode combo and Phill Jupitus/Phil Wilding double-team also have offerings worth downloading. BBC Radio piece-of-the-furniture DJ Mayo and hard-to-like-but-good-at-his-job critic Kermode have grown into an almost marriage-like relationship, which can be a bit trying at times, but the news, interviews and reviews are second to none and will save you seeing turkeys/guide you towards hidden gems. Phill and Phil’s Perfect Ten is the sound of two mates and former broadcasters – one a panel-quiz master, the other a rock writer – answering ten listener questions in half an hour. Again, the banter varies in quality and often descends into fairly puerile stuff, but given its brevity it’s usually worth a listen when they bother to make one.

Of course, no discussion about podcasting would be complete without mentioning Ricky Gervais, Stephen Merchant and Karl Pilkington. Starting with their Xfm show a decade ago they made a series of pioneering and hilarious pods until 2005 when Guardian Unlimited offered the show as a series of 12 shows. It became a Guinness World Record holder for the world’s most downloaded podcast and the series has now been downloaded over 300 million times.

The later pods have now of course been made into an HBO animation, but last November Ricky announced on his blog that a new series of podcasts would be recorded this year featuring Karl as an agony aunt. They’ve also got a Comic Reliefspecial up at the moment which is typically uproarious. Theirs is the only show that can make me laugh as loudly and consistently as A+J, and while I still can’t shift the feeling that the whole thing promotes bullying and Karl might one day turn out to be an incredible comic creation, it’s another feather in Gervais’ already stuffed cap.

He’s now into his second BBC Scotland series and hob-nobbing with George Michael on Twitter, but back in the good old days, Brian Limmond‘s Limmys World of Glasgow podcasts were the most subversive comedy since Chris Morris’ Jam. The series finished back in 2006, and if you’re baffled by his patter then you probably won’t enjoy them, but if you do have an appreciation for the Weege, then Limmy’s range of characters are disturbingly amusing and immensely quotable.

There’s a few more comedy pods out there worth a click; the BBC Comedy of the Week podcast gives a usually amusing selection from the multitude of excellent shows amongst the corporation’s listings, while a friendly mention has to go to comedienne Liz Stephens, whose Weekly News from Bed are a delightfully scathing look at the last seven days happenings. I feel I should also mention the likes of Dave Gorman’s Absolute Radio highlights show, Kevin Smith and Scott Mosier’s long-running Smodcast, stand-ups Nick Doody and Rob Heeny’s Doubling-Up, the painfully chirpy Answer Me This and video game waffle-zone One Life Left. They all have their merits, but I’ve rather fallen out of love with all of them for a variety of reasons, but mostly due to an overall lack of entertainment.

Of course pods aren’t all about laughs, all the big news outlets have a range of fine offerings, but I tend to read newspapers being the journalistic Luddite that I am. There are a few genuinely intelligence-boosting and thought-provoking pods that I’ve found though: Independent columnist Johann Hari‘s fight for what’s right, Freakanomics‘ author Stephen J. Dubner delving into economic quirks and The Naked Scientist‘s reassuringly earnest look at popular science.

Before we get on to purely music pods, there are a few favourites which contain the heady mix of music and talking, such as Guardian’s other podcast of note, Music Weekly. Now hosted by the slightly dick-ish Alexis Petridis and the lovely by comparison Rosie Swash, it’s unashamedly pretentious, but often has some quite interesting interviews and irregular features worthy of keeping it on your iTunes list.

A similarly irritating host comes in the form of The Mixmag Podcast‘s Digby, who again is saved by some decent new music and interviews with interesting dance music bods. Blurring the line between music and comedy are Charlie, Dave and Rik from Tothebone Radio, who combine an eclectic mix of old and new proto-disco, deep house and experimental electro with shoddy mixing, in jokes and playground innuendo. It’s better than I’ve made it sound; promise.

Similarly, a lot of the best record labels and promoters are also part of the podding game: 2020Vision, Fools Gold, Solid Steel, Ninjatune, Crosstown Rebels, Get Physical, Bleep, Allez Allez, Marine Parade, Mulletover, Bugged Out! and Durr to name but a few.

Finally, there are several artists and DJ’s which utilise the promo potential and fan rewarding capabilities of podcasting, from aspiring talent like Tom Morgan and the so-hot-right-now Soul Clap, through to established names like Damian Lazarus, Erol Alkan and SLAM.