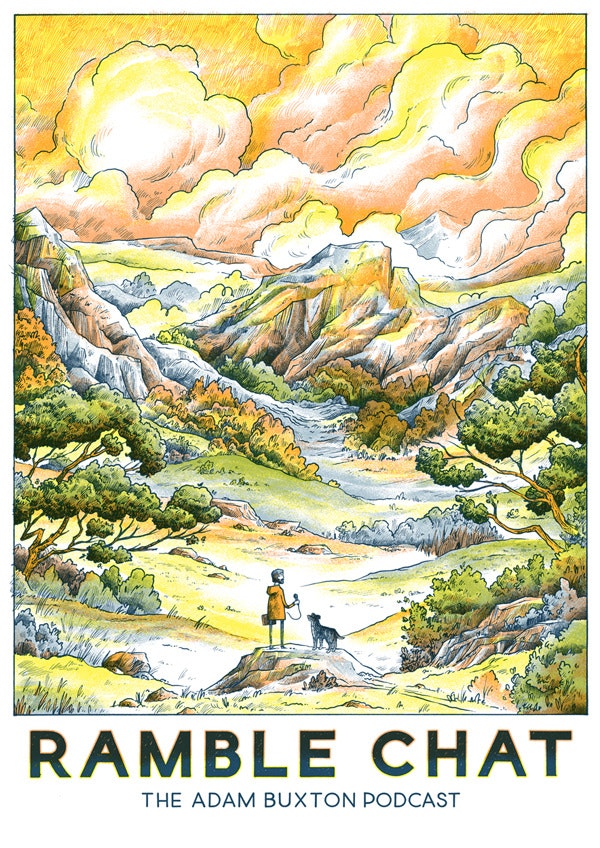 In Praise Of Podcasts - A Reappraisal

I hate commuting in and out of London on the train. It's expensive, crowded, smelly and unfriendly.

The one good thing about it is listening to podcasts - something which I haven't done in five months or so due to the Coronavirus working from home situation. This means I have a slightly ludicrous backlog of episodes to get through at some point.

I have also been copying and pasting all my old blogs across from Wordpress to Fabrik - because I don't trust the internet to retain my content - and almost a decade ago, I wrote a blog about how much I loved podcasts; especially the BBC6 Music one from Adam and Joe.

Aside from being tremendously ahead of the trend - as per usual - it struck me how much the medium has changed, while at the same time, how much it has stayed the same.

Case in point - while the Adam and Joe show finished at the end of 2012, thankfully Mr Buxton started up his own ramble chat and has pumped out almost 130 episodes at time of writing.

While he doesn't have his comedy wife to converse with - bar the beloved Christmas Day episodes - there has been a diverse array of interesting people to interview - Michael Palin, Johnny Marr, Kathy Burke and Jeff Goldblum, to name just a few.

Adam's just a lovely person to have in your ears. From his completely non-threatening, conversational style, to the range of little jingles and genuinely entertaining self-made adverts. He's obviously a very funny chap, but there's have been times of tenderness too. During the last five years he's lost both his parents and his hero David Bowie - and not shied away from talking about any of it - generally finding a good balance between glib and genuine.

Suffice to say, long may he continue his fairly inconsequential, but hugely valuable, sporadically-regular run at the top of my recommendation list.

Working through the rest of my pod tips from April 2011 though, it's interesting to see how many have either fallen by the wayside, or out of favour with myself.

In the previous post, I continued on from A+J by considering some of the other 'two blokes in a room' shows on offer. Of those, only Simon Mayo and Mark Kermode's Wittertainment film review show is still soldiering on, with Phill Jupitus and Phil Wilding's profanity-laden Perfect Ten petering out in 2014, and the arguable career high-point Ricky Gervais Show making way for his telly career long before that.

There are also some that I've fallen out of like with, including Kevin Smith's SModcast, which I gave up on right around the time he descended into a complete stoner bore (perhaps he always was?), and The Bugle, which just hasn't been the same since John Oliver split to go full time on Last Week Tonight.

Presumably casting the net wide for maximum eclecticism, there are some old suggestions that I can't even really remember listening too - One Life Left, Doubling-Up and the Naked Scientists for instance - alongside recommendations that haven't aged so well - see Johann Hari's pre-plagiarism run as a podcaster.

Some shows I dearly miss, like Limmy's brilliant early character work on the World of Glasgow, and the matey banter and great music of Tothebone Radio. The Guardian's Music Weekly podcast ceased in 2016 and hasn't been adequately replaced, while the weird and wonderful Lazpod doesn't appear to have been updated since 2017.

But while it appears music-focused podcasting is on the wane, football podcasting has exploded in the last few years. In my original post I praised the James Richardson-helmed Football Weekly, but in one of the nascent industry's biggest defections, he made the summer transfer window move in 2017 to start up the rival Totally Football Show.

I already also listened to The Football Ramble, so now had three football pod subscriptions - and that was before they all began sprouting extra shows on additional days of the week. To be honest, it's all become a bit much, and while I haven't given up on any of them, the majority get deleted before downloading as there's only so much analysis I can take.

Brief shout to the apparently defunct Reducer podcast, in which the now Observer columnist Séamas O'Reilly got his break describing the crap curiosities of football culture like Steve Bruce's long-lost novels and a memorable meeting with Mary McAleese.

One spin off I have quite enjoyed is from arguably the two funniest members of the Ramble quartet - Luke and Pete - who also during the summer of 2017, started a little show about nothing much in particular. It lasted the summer, grew to twice weekly and even had the lack of quality control to read out one of my anecdotes (skip to 15.45 below). The two of them have remarkably good chemistry and the show just about makes up for the loss of the Dean Windass Hall of Fame.

So what else am I currently subscribed to?

Well, as the medium has grown in popularity, so have my subscriptions.

I still love listening to the big US public radio staples like This American Life - along with its spin-offs Serial, Invisibilia and S-Town - plus Radiolab (we miss you Krulwich); Freakonomics Radio and Planet Money.

In the interim I've also found some new favourites from across the pond: Malcolm Gladwell's interesting-dinner-party-fact-heavy Revisionist History; the frequently brilliant internet-based investigations PJ and Alex on Reply All; the sonorous tones of Roman Mars and his design-obsessed reporter minions on 99% Invisible; Josh Green's beautifully written reviews of 21st century miscellany, The Anthropocene Reviewed; Chuck and Josh's consistently educational Stuff You Should Know; David McRaney's proper pop psychology You Are Not So Smart; and the wonderfully revealing Song Exploder (although it very much depends on the song/artist).

In a similar bracket, but slightly ruined by their host's voice (I'm aware this is entirely my problem, not the generally high quality shows') are Hidden Brain with Shankar Vedantam and the TED Radio Hour with Guy Raz - both of which cover really thought-provoking topics with interesting interviewees.

Which is something that can't always be said for the inexplicably popular Marc Maron and Joe Rogan. I did give Maron and extended try, given the high esteem some people seem to hold him in, but his self indulgent extended intros and sloppy interview technique got on my tits too frequently. A more extreme case of the same problems plague Rogan, with the added issues of giving distinctly-dodgy guests easy rides, espousing potentially dangerous conspiracy theories, and the endless bloody UFC chat.

Given it's audio-only, grating accents and repeated turns of phrase can really get on your nerves. While the 'vocal fry' of certain NPR presenters doesn't bother me that much, there are others that I listen to through gritted teeth, willing the interviewer to let their guest speak. Case in point, Scouse PR man Paul Blanchard on the Media Masters podcast, who seems to love the sound of his own voice and opinions about the Labour Party. Less the voice, more the patter, seems to be the problem for me and Richard Herring's RHLSTP - his standing in the comedy scene gets him great guests, but his chat is so shit I usually can't be bothered getting to the interview.

At the same time, a pleasant voice, well-researched script or naturally funny delivery, can be an absolute joy to listen to. Case in point, Rubberbandits front-man Blindboy, who's few shows to promote his book of short stories has turned into a weekly catalogue of roasting hot historical takes, lovingly put together deep dives into musical moments, regular digressions into Irish rebel politics and valuable personal explanations of mental health. Least/most importantly, his lovely Limerick brogue makes it all so easy to hear, even for his many international listeners, who I'm sure don't understand half of the colloquialisms. Yurt.

I'm also aware than one of the biggest podcast genres these days is true crime, but I can't say I've ever got that into it - although, as always, I'm happy to take trusted tips. The exceptions have been the South London journo-killing Untold: The Daniel Morgan Murder; and the Rhode Island mob drama Crimetown (the latter also has an intro tune to surpass even that of Freakonomics).

Comedy podcasts of various shapes and sizes are also understandably popular, but aside from maybe Rule of Three, I can't be doing with comedians endlessly unpicking their craft and its deep-rooted melancholy. No, I much prefer a couple of Northern blokes doing silly voices (Athletico Mince), or - to a much lesser degree - one silly man trying to get with the times (The Ron Burgundy Podcast).

Bonus shout for the new and predictably excellent Alan Partridge podcast, from the Oasthouse, which I actually paid money to Audible for - and will now have to go through the excruciating process of unsubscribing from.

One of the many reasons I continue to pay the license fee is for BBC Radio, and the podcasts it produces. I do use the much-derided Sounds app for mostly music shows like the Essential Mix, The Residency, Mary Anne Hobbs and Gilles Peterson, but most of the best stuff is thankfully still on the podcast channels. Specifically, Kate Adie's From Our Own Correspondent, Melvyn Bragg's In Our Time, Lauren Laverne's Desert Island Discs, Jarvis Cocker's Wireless Nights, and The Infinite Monkey Cage with Brian Cox and Robin Ince.

The only other music podcasts that seem to have survived in my subscriptions are from Resident Advisor - their long-running cannon of DJ mixes more recently joined by the RA Exchange interviews. Kudos to Tim Sweeney for being a crap host with great taste and making it past 1,000 shows with his Beats in Space, as well as Solid Steel for maintaining its weekly shows for 30 years.

A recent and welcome newcomer is Last Night on Earth hosted by inimitable Tiga. He excels at having chummy but insightful chats with his DJ mates (thankfully, as with it appears just about everything, he has great taste) who are asked to plan out their fantasy final party.

I've managed to roughly theme most of my paragraphs thus far, but will struggle to pull together my final recommendations so neatly. So here are some final shouts for: Jon Ronson's obviously excellent Last Days of August; the often explicit, but always interesting Love + Radio; Helen Zaltzman's surprisingly interesting word derivation show The Allusionist; Mike Powell's series of entertaining interviews with snowsports' biggest stars, The Powell Movement; and a newbie to finish, the annoyingly talented Al Horner's new venture, getting scriptwriters to reassess their best works on Script Apart.

If you've made it this far, I hope you'll allow me one last plug. There was something of an ulterior motive for writing this post now, in that I've been dragged kicking and screaming into the podcast game myself.

Given I write about technology for a day job, it seemed silly that at least one of my titles didn't have its own pod, so (to be honest, more as a commercial venture than anything) we started recording interviews with a variety of FinTech luminaries. I then recorded/commissioned some jingles (bigup Brad for production support) and began the laborious process of getting an XML feed, populating it and waiting for people to listen.

Only it's one of millions of competing shows, so barely anyone has.

I'm not asking you to suddenly sprout an interest for this particular topic, but give us a wee like and subscribe, and maybe use them to help you overcome the understandable existential angst and get to sleep at night.