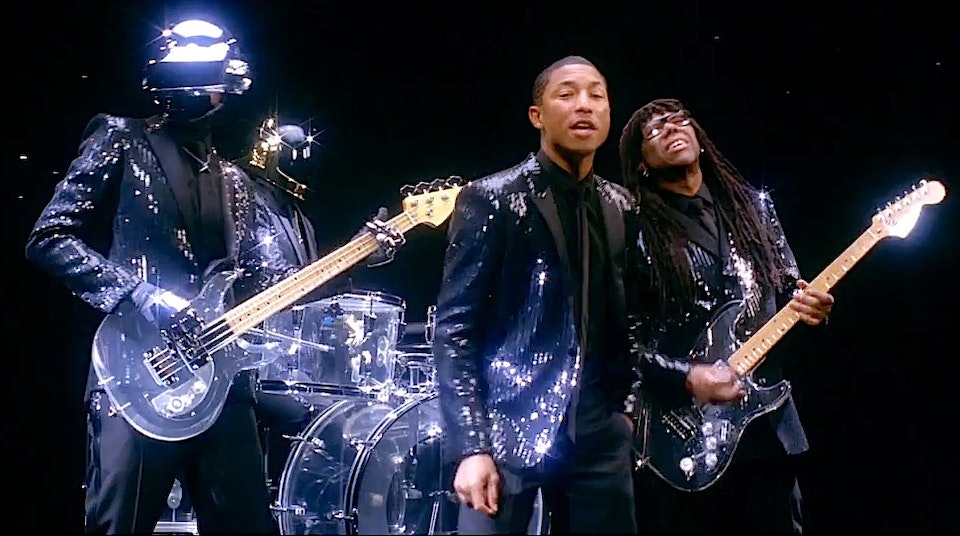 I appreciate I’m a bit late with this (I do have excuses, which I’ll get to later) but it’s still a new year, which means lots of new music to look forward to. Therefore, as has become traditional, I shall now run through all the new album news that has caught my eye.

First of all, let’s get some of the more well-reported ones out the way. You’d be a fool not to have heard about David Bowie‘s characteristically idiosyncratic surprise album announcement for The Next Day. If I’m honest, I wasn’t bowled over by the first single Where Are We Now?, but the video was quite interesting and it’s nice to see he’s not afraid to show his age. A similar furore surrounded the recent news that Daft Punk have left EMI for Columbia Records, where they were working on their fourth album; due sometime in the spring. Of course Chic legend Nile Rodgers has been blabbing about working with the French duo for a while now, but this is the first official confirmation we’ve had.

More old news comes in the form of Thom Yorke and his merry band Atoms For Peace finally releasing their debut LP Amok on February 25th. They dropped Default late last year – which I thoroughly enjoyed – and XL recently released a video for Judge Jury and Executioner. Another bunch of indie hipsters, Foals are also preparing to unveil their new album soon, with Holy Fire already getting good reviews ahead of its February 11 release date. I’ve listened through it a few times now and can confirm that it continues their fine run of form, although the pre-release single Inhaler is still my favourite cut:

Sticking with guitar music, some of my favourite bands are getting back to work this year. The Yeah Yeah Yeahs will bring out Mosquito on April 5th, and it sounds like a rather interesting project. According to The NME, they’ve been working with David Sitek again, as well as having one track produced by DFA head honcho James Murphy and guested on by Dr Octagon. “It’s definitely different from the last album,” said Karen O. “So I guess you could say that hasn’t changed about us! It’s all over the place. The sound of the record is, I guess, a bit more lo-fi sounding and slightly more influenced by roots reggae. There’s a lot of delay on stuff and there’s a more raw sound to it than there was last time.”

Meanwhile, The Queens of the Stone Age have reassembled the classic line-up, recently confirming Mark Lanegan will join Josh Homme, Nick Oliveri and Dave Grohl for a new record expected in March. Similarly long-winded in name and Yank rock in style, Black Rebel Motorcycle Club will follow 2010’s disappointing Beat the Devil’s Tattoo with their seventh album, Specter At The Feast on the 18th of March. After The Strokes‘ brilliant return with Angles a couple of years ago, they’re back again with Comedown Machine on March 25. Lead single One Way Trigger is being given away free on their website, but to be honest it sounds pretty whack, so you might not want to bother. A bit further down the line, the new one from those crazy Canucks Arcade Fire is supposed to be coming out sometime later this year, with help from that man James Murphy again; nice to know he’s not procrastinating after the break up of LCD Soundsystem. Finally, elegant synth rockers Depeche Mode are due to return with Delta Machine on March 26. They released the video for first single Heaven (below) a few days ago, which sounds promising, although I’m mor looking forward to hear what Matthew Dear does with it on the remix package.

Bridging the gap between indie rock and electronic music are bands like Phoenix, who announced their next album via an epilepsy-inducing update to their official website. Not entirely sure when it’ll be out, but it’s glaringly obvious that the title will be Bankrupt. In a similar vein are MGMT, who will be looking to get their careers back on track after the critic-baffling Congratulations. A recent Rolling Stone interview revealed that the new album is tentatively scheduled for June, the duo have gone back to recording things themselves rather than with a full band, and perhaps most interestingly, the new songs are influenced by Aphex Twin and house music.

One of my favourite live bands, the mighty !!! (or Chk Chk Chk to the uninitiated), are preparing to release their fifth long-player on April 29; the brilliantly titled THR!!!ER. Guitarist Mario Andreoni went into a bit more detail: “Over the course of many long van rides and post-coffee verbal riff sessions, Thriller didn’t merely come to represent the selling of a lot of records, it became synonymous with an artists’ and/or genres’ high-watermark. INXS’ Kick is the Australian Thriller… Alanis’ Jagged Little Pill is the Canadian Thriller…Wham!’s Make It Big is the blow-dryer’s Thriller… Sister Ray by the Velvet Underground is the Thriller of musical fever dreams. One day at the studio, Nic [lead man and funky dancer Offer] drew THR!!!ER on a napkin and I liked it; then we made our THR!!!ER."

Swedish siblings Karin Dreijer Andersson and Olof Dreijer, AKA The Knife, are set to finally follow 2006’s well received Silent Shout with Shaking The Habitual on April 9. To whet appetites, they’ve released an almost ten minute long video for single Full of Fire, which is typically odd and out there; more power to you if you make it to the end. Staying in the far north, Icelandic band Sigur Rós told Redditors during an AMA that they are currently working on their seventh studio album, due out later this year. They also stuck a teaser video up to promote their upcoming UK tour, which appears to be a snippet of the track Brennisteinn.

Onto dance music proper, and the album I’m probably most looking forward to is Moderat‘s sophomore effort. Creatively titled II, it’s due out on the 2nd of August on Modeselektor’sMonkeytown Records. “We have known each other for 12 years now, and during that time we haven’t really changed that much: we are still three guys mostly talking about hi-hats and tape machines while hanging out in the studio,” read a statement from the trio, adding that the album is, “an experiment of exploring our similarities and differences and to interlace them to something new and exciting.” The rat in the pack, Sascha Ring, also has a new solo project due in February. Kreig Und Freiden is a concept album inspired by Tolstoy’s epic War And Peace; sounds like it could be challenging.

Also worth mentioning, but with a bit more brevity, are new albums from Ninja Tune stalwart Bonobo– The North Borders is out on April 1 (see the wonderful Cyriak-directed video for lead single Cirrus below) – Justin Robertson – who’s first album since 2001’s Revtone will be out in March via his Deadstock 33s guise – Daniel Avery – is holing up in the studio to work on a debut album once he gets back from his current American tour – Mount Kimbie – who signed to Warp late last year and have a new record in the works – Space Dimension Controller – whose debut LP Welcome To Mikrosector-50 is due on R&S come March 4 – Maya Jane Coles – another debut work that’s due in the spring – Alex Smoke – who is releasing a new album under his more bass-heavy Wraetlic moniker tomorrow – Brant Brauer Frick Ensemble – the second album Miami is slated for a March 11 release – and finally Lusine – who’s stunning third album The Waiting Room comes out on Ghostly International February 18.

While 2012 was the strongest year for hip hop albums in a long time – see my mate Hugh’s well made argument here – so far I can only find three albums that have me enticed in 2013. First up is the triumphant return of supergroup Deltron 3030, once again pairing the production talents of Kid Koala and Dan Automator with Del The Funky Homosapien’s witty future raps. Still no release date, but they did release a teaser track Pay The Price earlier in the year, which sounded promising. It’s over a decade since Deltron 3030’s eponymous debut, and the same goes for the mighty Cannibal Ox, who’s 2001 classic The Cold Vein (and brilliant Oxtrumentals version) hasn’t been followed up since. Unfortunately El-P has been replaced by producers Bill Cosmiq and Melodious Monk, but one half of the Harlem duo Vast Aire promised the album will retain “that raw, gritty, spiritual, intellectual, futuristic New York sound.” To prove that I’m not stuck in the past when it comes to rap, I also like the sound of Danny Brown‘s follow up to the downright filthy debut alum XXX, the apparently more mature in content and title, Old. “If people are looking for dick-sucking jokes, there isn’t too many of them,” he was recently quoted as saying, which is good, because when he spits about other things – like his youth on the excellent Grown Up last year – he’s a genuine talent. There’s also collaborations with A$AP Rocky, Purity Ring and Rustie to look forward to.

Finally, as I alluded to in the opening sentence, I started 2013 as I mean to go on, by writing for some new people. So far this month I’ve reviewed three fine new albums: Toro Y Moi’s best work yet Anything in Return, FaltyDL’s well-rounded Hardcourage, and The Asphodell’s dandy debut Ruled By Passion, Destroyed By Lust. I was also lucky enough to interview one half of that last act, the legendary Mr Andrew Weatherall. Evidence here.

[IN THE FUTURE UPLOADING ADDENDUM: how depressing is it that all the links in the last paragraph are now dead? Most of them I didn't catch in time to screenshot either, so a decent amount of work I was proud of has just disappeared into the online ether]