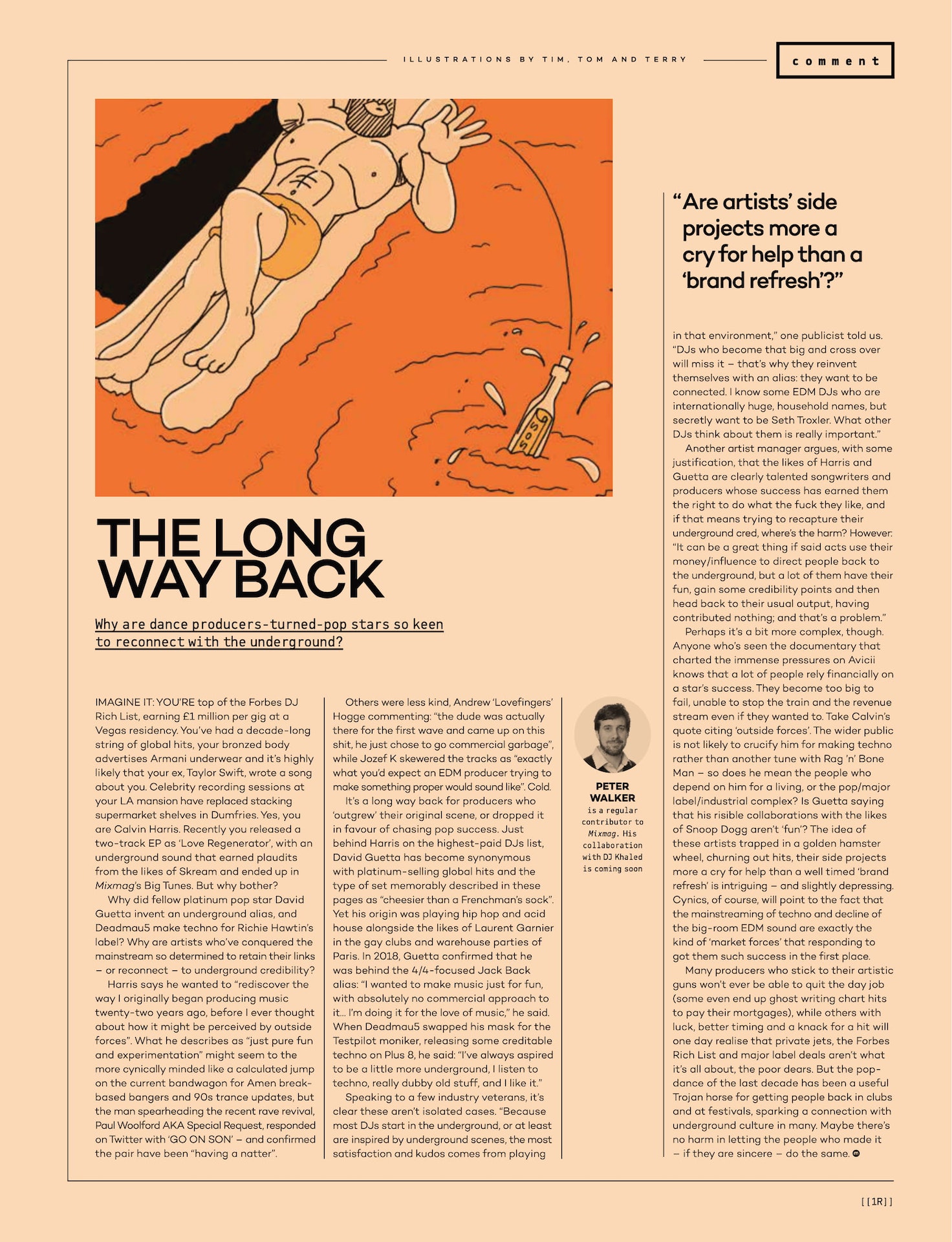 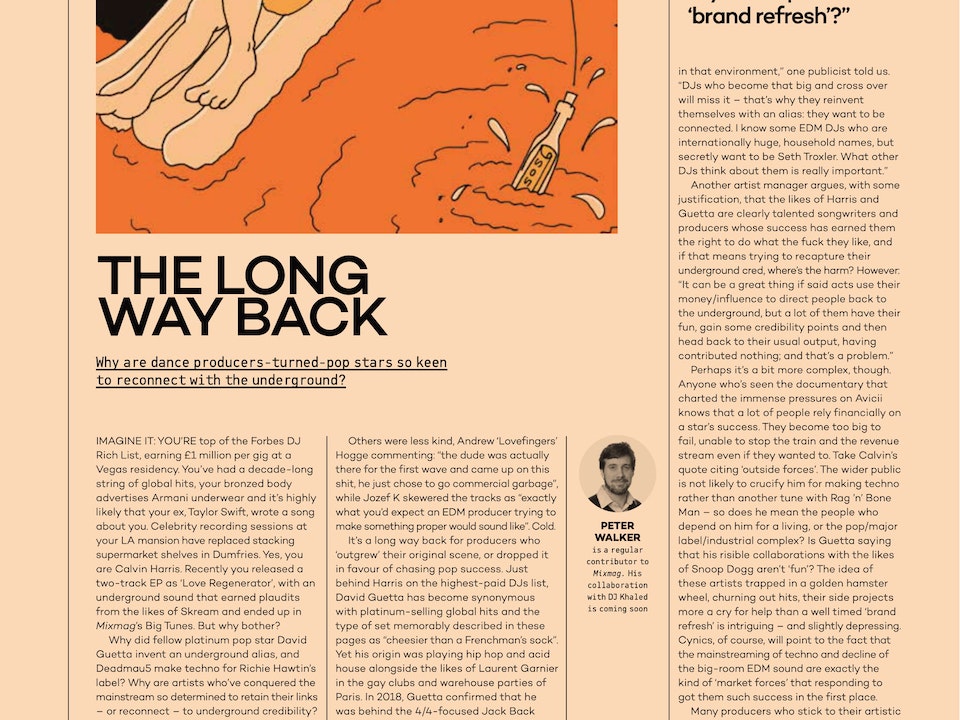 The Long Way Back

Just imagine. You’re top of the Forbes DJ rich list, earning £1 million per gig at your Vegas residency. You’ve had a decade-long string of global hits, your bronzed body adorns billboards advertising Armani underwear, and it’s likely that ex-girlfriend Taylor Swift wrote a song about you.

You’ve become accustomed to celebrity recording sessions at your LA mansion, as opposed to stacking supermarket shelves in Dumfries. You are Calvin Harris. Recently you released a two track EP under the Love Regenerator alias, with an underground sound that earned plaudits from the likes of Skream and ended up in Mixmag’s Big Tunes. But why did you bother?

Why for that matter did David Guetta try to get back to his roots as Jack Back, how come Deadmau5 went all techno with Ritchie Hawtin, and what’s the point in Steve Aoki eschewing cake-throwing EDM festivals for deep house sets at mere nightclubs?

The latest instance of reputation regeneration syndrome seems like a good opportunity to analyse what’s behind the trend. Why artists seemingly living the dream feel the need to reconnect with some long-lost - or potentially never realised - credibility.

Harris didn’t exactly try to hide the side project, stating that his new tracks were an attempt to “rediscover the way I originally began producing music 22 years ago before I ever thought about how it might be perceived by outside forces”.

What he describes as “just pure fun and experimentation” will seem to the more cynically minded like a calculated jump on the current bandwagon for Amen break-based bangers and 90s trance updates, although the man spearheading the recent rave revival, Paul Woolford AKA Special Request, responded on Twitter with a ‘GO ON SON’ and confirmed the pair have been ‘having a natter’.

Other DJs were less kind though, with Andrew ‘Lovefingers’ Hogge commenting “the dude was actually there for the first wave and came up on this shit, he just chose to go commercial garbage”, while Jozef K said the new tracks are “exactly what you would expect an EDM producer, trying to make something proper, would sound like”.

Therein lies one of the most ingrained issues in the music industry at large – the idea that mainstream success somehow invalidates any previous connections to the smaller scenes where someone started off. It’s worth remembering that even the most sold-out DJs and producers began their journey on the dancefloor, presumably falling in love with the music, rather than dreaming of the money to be made.

Only a few places behind Harris on the highest paid DJs list, David Guetta’s origin story sees him playing hip hop and acid house alongside the likes of Laurent Garnier in the gay clubs and warehouse parties of Paris.

The rest is history, but by the summer of 2018 rumours were confirmed that he was behind the more 4/4-focused Jack Back releases, stating that the moniker represented a “full cycle” back to the old days. “I wanted to make music just for fun, with absolutely no commercial approach to it, I want to make every type of music that I like; I’m doing it for the love of music,” Guetta said at the time.

Steve Aoki told Mixmag back in 2014 that a gig at Cafe Mambo in Ibiza led him to change his tune. “That kind of environment, the banging stuff doesn’t work, so I was playing house: Maceo Plex, Ten Walls, Tiga’s collaborations, Duke Dumont and some more underground stuff.”

Cancelled DJs aside, the quote reveals the reality that the music which made him millions on main stages just doesn’t cut it in most nightclubs. Likewise, when Deadmau5 swapped his mask for the Testpilot moniker, releasing some creditable techno on Plus 8, he was reported as saying: “I’ve always aspired to be a little more underground, I listen to techno, really dubby old stuff; and I like it.”

Speaking to a few industry veterans about the push and pull of the underground cool and commercial success, it’s clear there are several shades of grey between the two – with just as many instances of respected producers going the other way and releasing or ghost-writing chart anthems to keep up their mortgage repayments.

“Because most DJs start in the underground, or at least are inspired by the underground scenes, the most satisfaction and kudos comes from playing in that environment,” one publicist explained. “DJs that become that big and crossover will miss it – that’s why they reinvent themselves with an alias, they want to be connected.

“I know that there are some EDM DJs that are internationally huge, household names, but all secretly want to be Seth Troxler – what other DJs think about them is really important.”

Another artist manager argued that the likes of Harris and Guetta are clearly talented songwriters and producers to achieve what they’ve achieved – so have earned the freedom to release what they like. “It can be a great thing if said acts use their money/influence to direct people back to the underground, but a lot of them have their fun, gain some credibility points and then head back to their usual output, having contributed nothing; and that’s a problem.”

Much like sports stars or chief executives ‘giving something back’ by returning to help out youth projects in their old communities, it’s perhaps human nature to feel the need to do so once a certain level of success has been achieved. But then arguably, for a sense of guilt to be the driver behind such a move, the artist would be tacitly admitting a betrayal of their musical ideals in order to reach the top.

Making a living as a musician is becoming increasingly difficult, with only so many DJs and producers able to carve out a career balancing critical cool and a decent income. Most who stick to their artistic guns won’t ever be able to quit the day job, while some with good timing and a knack for a hit will one day be faced with the realisation that private jets and major label deals aren’t what dance music is really about.

As witnessed with the tragic death of Avicii, a lot of people rely financially on a star’s continued success, so they become too big to fail, unable to return even if they wanted to – with side project releases representing a cry for help.

Maybe that’s too charitable though, and these attempts at brand perception management shouldn’t be allowed to polish the musical turds that elevated them in the first place.

Calvin Harris will never return to manning the aisles of a Scottish Safeway, but if he genuinely switches production style back to something more suited to dingy sweatboxes than glitzy pool parties, then maybe he can claw back some status among his peers. But if this is just a temporarily conscience-quelling blast to the past, then normal status will be resumed and the invisible dance music divide will remain intact.

Perhaps the real challenge for entry back into the underground should be secret sets in random clubs - the great leveller being whether press-play stadium fillers can still enliven an indifferent dancefloor using traditional methods.